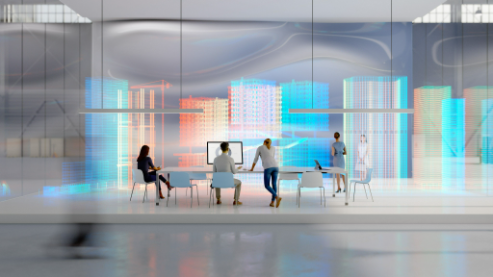 How do we future-proof the world of work?
As restrictions lift, there is plenty of talk about the future world of work – but how far into the future are people really looking? Workplace culture specialist Jo Hompstead considers how to move to a truly new way of working.

Over the past few months, ConnectUp founder Jo Hompstead has been running a series of events that are designed as thinking spaces about the future of work. The events are focused on what Jo calls the middle space between high-level rhetoric and low-level short-term operational measures. She explains:

“We are seeing quite a lot of very theoretical talk at the moment about the future of work and then on the other hand, you see quite a lot of reactive activity such as office layout changes – like moving desks and buying screens, adapted policies and new rules.”

“I wanted to facilitate a space in which we focus on emergent, future-focused change that sits in the ‘middle space’ between high-level theory and low-level reaction activity,” she says. “So I invited people via LinkedIn and Twitter to join the conversation and see where it took us.”

Jo’s first online event on Designing the Middle Space took place in January. It confirmed for her that she wasn’t alone in her thinking: “People from all over the world tuned in and they were all saying the same thing,” she says. “Everyone was grappling with the issue of what are the real-live actions we should be taking to make sure we are future proofed instead of returning to the old ‘norms’?”

In exploring this, the event surfaced eight key themes that a future workplace needs to encapsulate.

The first was purpose and meaning: “People are increasingly looking for purpose at work and meaning in their work,” says Jo.

Second was a desire to redefine the workplace. “We discussed the question of what is work – is it something you are paid to do? Is it something a group of people are communally doing together? What does it mean?”

A third theme was balance: “The phrase work-life balance probably feels quite old-fashioned now, so what do we mean by balance?” asks Jo. “It may also mean different things to different people.”

Fourth was a sense of belonging: “It’s about feeling attached to something but ties into that theme of meaning too.”

Fifth was a need for support and community: “Going into a hot-desking space where you are made to sit with your team based on a hierarchy doesn’t make much sense anymore,” she says. “So what is a team made up of – who do you need around you?”

The seventh theme was serendipity: “It’s the same thing I’ve missed during lockdown – those random moments when you are out and about and you meet someone for coffee and someone else happens to walk past. How do you build the magic of those serendipitous moments into the future of work?” she asks.

Jo used the themes as a springboard for her second event, which was held in February. The conversation moved on to talking about the ‘so what?’ – what actions can leaders and workplaces take right now in readiness for the future? Actions discussed included:

1. Create quiet spaces in the office. Although people might be desperate for social interaction, they may have become institutionalised and used to avoiding people in public. The reality of returning to an office might not live up to our hopes and those offices might seem noisy and full of distraction. Setting up quiet zones along the lines of quiet carriages on trains can give people breathing space, especially as everyone is re-emerging.

2. Build checking in with people into your routine as a leader. The mental well being of employees has been elevated in importance over the last year and forward-thinking companies will continue to put their people front and centre. Check-ins will be essential as people resettle and leaders will need a proactive approach to finding out how their employees are feeling. They will also need to be sensitive to people’s preferences for social interaction.

3. Create organic ways to touch base. Check-ins and other meetings don’t have to be formal – a conversation over coffee can help a leader understand what’s going on with people, as well as acting as an informal mentoring moment. Walking meetings with no agenda can also feel more comfortable for some employees and give senior leaders the opportunity to present a more human touch.

4. Hold group sessions where anyone can talk. Group sessions can help ensure everyone feels they have a safe space for conversation and that their input is valuable. In hybrid models, group sessions are also important for bringing together those at home with those in the office to avoid polarisation.

5. Harness the unifying power of company values. Company values and leaders can help to bring people back together. However, individuals have spent the last year re-evaluating work and how they relate to people. The challenge for companies and their managers will be to ensure that values reflect what people want from work now – and leaders will need to show that they live by the values of the ‘new way’ too.

6. Use technology to work better. The last year has shown us that virtual technology can be our friend – so how can it continue to reset what we do and make it better?

The third Designing the Middle Space event takes place on 30th March. The session will continue this conversation, with a strong focus on tangible action, asking: What do the themes from the second meeting actually look like in terms of actions people could be taking? What support, training and advice might leaders need in order to lead well in this different environment? How do we encourage everyone to take responsibility, rather than everything being a leadership or HR issue?

The objective is for attendees to commit to some actions that they will take within their workplaces or with clients.

To find out how to join the conversation, visit www.connectup.business/events